It’s no secret that politics (and cultural movements) go through cycles. An idea goes in vogue, drops off the map, then reappears at some point down the road.

Sometimes these patterns are as predictable as the ebb and flow of political parties. Democrats run the show for eight years, then they swap with Republicans. You can almost set your watch to it.

And sometimes shifts arise from an earth-shaking trigger. Like a war, or pandemic.

But what we struggle to grasp is the scale of these cultural shifts and events compared to past occurances. “Are we on one side of the pendulum, poised to return to center, or have we broken the pendulum?” “Is our response to an event stronger, weaker or the same as the last time it happened?”

Our search behavior is a good proxy for sentiment. Theoretically, one way we could quantify something inherently qualitative is to observe relative search interest over the past 15+ years.

For example, if we wanted to answer the question “how much more concerned is the world about coronavirus than it was about the Swine Flu in 2009?”, we could measure the difference in relative search volume for “pandemic” for both periods.

Google Trends relativizes search volume on a scale of 0-100. Being that the scores are relative rather than absolute, interest can never go above 100. For example, if in August of 2020 search interest for pandemic goes higher than the 100 score shown on the graph above, the new score will actually report as 100, and all the previous scores will be lower. This is a relative scale.

The pandemic example is a bit of a no-brainer. The peak interest during Swine Flu times was roughly one-fifth of what it hit in March of 2020 during the coronavirus. This makes sense given the nature of both viruses.

Interestingly, It also makes sense that there is 22% less search interest in “vaccine” as there was during the Swine Flu, likely due to an inverse relationship with the query “anti vaccination,” which is steadily growing in relative interest.

Alright, now that we’ve gotten the easy stuff out of the way, let’s have the difficult conversations about society.

The death of George Floyd in Minneapolis sent shockwaves throughout the entire world. These reverberations saw a massive resurgence of interest in “Black Lives Matter” and other related queries.

The current climate feels more intense than past events, namely Ferguson and the mass protests of 2016, but by how much is this a true statement? Let’s take a look at some of the past events that created peak interest in a topic and compare them to the current events.

I assure you that these figures were not cherry-picked. Each of these queries have seen more than double the interest than each of the three previous peaks (all separate events). Not only that, but each is fully maxed out at 100.

Further, according to Ahrefs each of these three topics have seen their peak media mentions in June 2020: 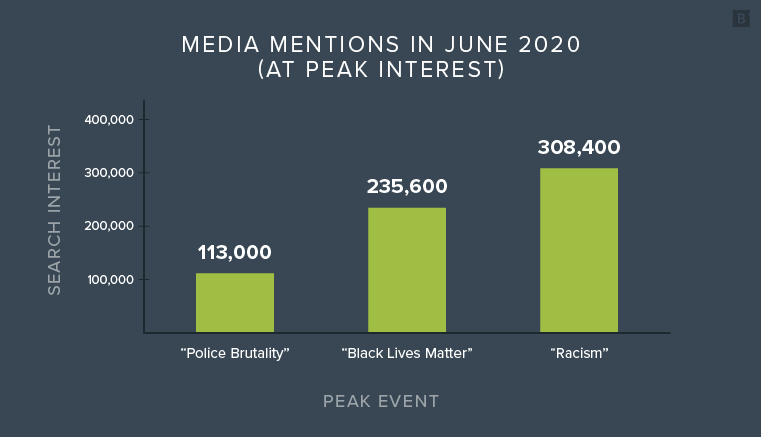 So to answer the question “Are race issues relatively intense in the current climate?”, I would say that search behavior points to a resounding yes.

The issues with the economy are inextricably linked to the pandemic, which has impacted nearly everyone on the planet. And it’s certainly going to take some time yet to fully tabulate the bill. An early indicator might be the relative frequency that people search “recession,” “evictions” and “unemployment benefits.”

Certainly metrics like GDP, unemployment and eviction rates are the correct metrics to measure the true cost of these events. But in the spirit of understanding relative interest, or shall we say “concern” over economic issues, it seems that the current pandemic age at minimum matches the housing crisis of the 2000s.

Likely spurred by a combination of an inflammatory president, a progressive culture and triggering events, a flurry of social and political issues have also reached peak interest.

Certainly race discussion is a close neighbor to these social issues, so it makes sense that a rising tide raises all ships. But what’s interesting is that each topic rose to its highest relative interest level over the past 15+ years, all at the same time.

At the risk of abusing the expression “the perfect storm,” there truly is no comparison for the collision of political, economic, and cultural issues colliding in the United States.

Take a look at the simple chart below that shows the current issues nearly all maxed out in 2020 relative to any time in the previous 16 years: 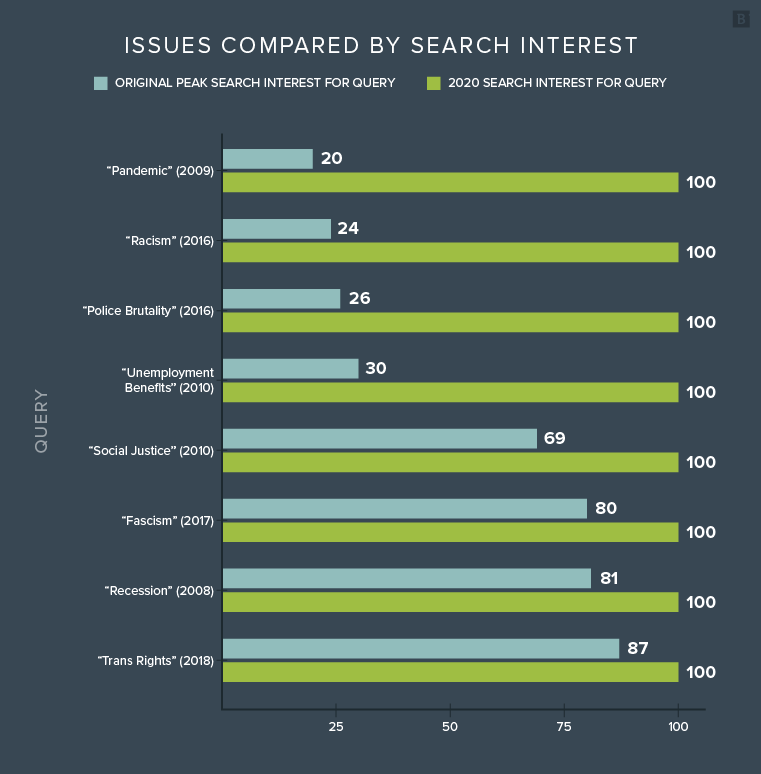 We are at peak awareness for a cross-section of social issues, economic issues, and health and wellness issues. To further compound these issues, take a look at our mental health profile: 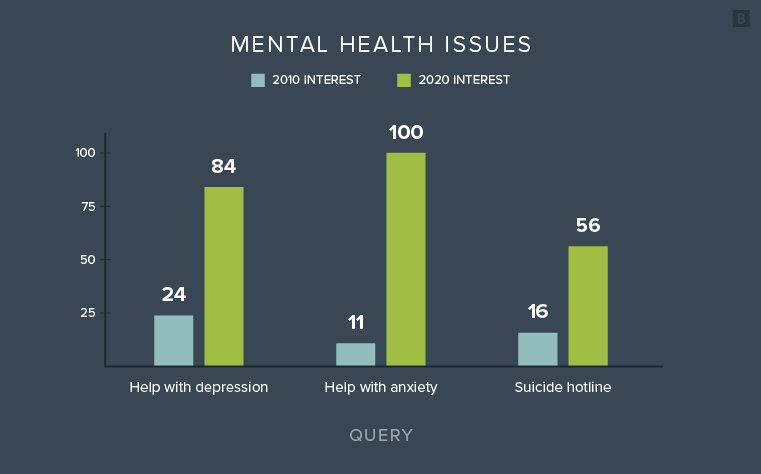 Before writing this, I hoped to get an understanding of how intense our political climate is compared to recent memory. What I didn’t anticipate was that topics from each of the three main issues that drive our daily lives (social, economic and health) had all intersected at their peak interest at the exact same time: right now.

And this is all coinciding with our deteriorating mental health.

I had hoped to answer a simple question, but it seems that I have rather stumbled upon the makings of a powder keg, and depending on how you interpret the data, we are either poised for increased conflict and infighting resulting in something even more drastic (like a revolution), or a temporary shift back to the norm until future events break even more records.

Though, this may also be reading too much into search data. You tell me.